The Historical Practice of Pilgrimage.


Even though there was little to be seen at biblical sites in Palestine and Jerusalem for most of the first three centuries of Christianity, from the earliest days of the church, a few Christians, motivated initially by intellectual curiosity rather than a spiritual yearning to deepen their faith, made the hazardous journey to visit the locations associated with the life, death and resurrection of Jesus.[1]

However, the nature and development of Christian pilgrimage underwent a dramatic change in AD 312 when Constantine established Christianity as the favoured religion of the Roman Empire and began restoring biblical sites, building churches to commemorate sacred places, and encouraging pilgrimage to them,[2] thus from the fourth century onwards, Christian pilgrimage has been conceived of and practiced in three main ways: moral pilgrimage, interior pilgrimage, and place pilgrimage.[3]

Moral pilgrimage emphasises the theological meaning of pilgrimage, i.e. the whole of the Christian life is viewed as an ongoing journey towards the heavenly Jerusalem and this concept is based in the portrayal of Christians as “strangers and pilgrims on the earth” (Heb 11:13), residing here temporarily (cf. 1 Pet 1:1), but whose true “citizenship is in heaven” (Phil 3:20; cf. Eph 2:19; Heb 13:14).[4] The present life of faith is the path of daily obedience expressed in moral behaviour and service to God and others.[5]

Irish monks in the sixth and seventh centuries likewise saw pilgrimage not as a journey to a particular holy place like Jerusalem or Rome, but as voluntary and perpetual exile from one’s homeland undertaken as a form of asceticism - they renounced the comforts and distractions of this world and embraced a life of separation from everything they loved for the sake of God.[6] Their approach was based specifically on imitating the biblical example of Abraham who, in obedience to God, left his home and native land and went to live in a foreign country (Gen 12:1; Heb 11:8), and they understood themselves to be undertaking a perpetual pilgrimage which focussed on the interior journey of the soul toward God achieved by suffering hardship and practicing spiritual disciplines such as fasting, prayer, meditation, and penitential exercises.[7] 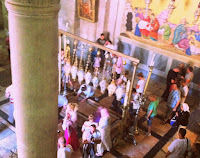 Place pilgrimage was a social movement that became prominent in the medieval period (500-1500 AD)[8] and is generally defined as “journeys to holy places undertaken from motives of devotion in order to obtain supernatural help or as acts of penance or thanksgiving”.[9] With it came a marked growth in the veneration of saints (the draw of St Peter and St Paul’s tombs in Rome was already strong) eventually resulting in Canterbury, Cologne, Santiago de Compostela, and Constantinople also becoming major pilgrimage destinations, however the Holy Land, and Jerusalem in particular, remained the place Christians most desired to visit because the (empty) tomb of Jesus Christ himself – the central figure of the Christian faith – was located there.[10] Therefore, although there were many unbiblical[11] and less than pious reasons for undertaking a pilgrimage,[12] by the eleventh and twelfth centuries many Jerusalem pilgrims considered their pilgrimage to be an imitatio Christi in which they imagined and re-enacted in their own lives the events associated with Jesus’ service and suffering.[13]


[1] Ian Bradley, Pilgrimage: A Spiritual and Cultural Journey (Oxford: Lion Hudson, 2009), 30.
[2] Bradley, 31-32.
[3] Dee Dyas, “Pilgrims and Pilgrimage: Pilgrimage in Christianity”. WWW page.  <http://www.york.ac.uk/projects/pilgrimage/content/index.html> (n. d., cited 30 July, 2016).
[4] “pilgrimages” in Dictionary of the Christian Church, 3rd ed., eds. F. L. Cross & E. A. Livingstone (Peabody: Hendrickson, 1997), 1228; Dyas, “Pilgrimage in Christianity”.
[5] Dyas, “Pilgrimage in Christianity”.
[6] Bradley, 37, 39; Dyas, “Pilgrimage in Christianity”; “pilgrimages” in Dictionary of the Christian Church, 1228.
[7] Bradley, 38-39; “pilgrimages” in Dictionary of the Christian Church, 1228.
[8] Justine Digance, “Religious and secular pilgrimage”, in Tourism, Religion and Spiritual Journeys, eds. Dallen J. Timothy & Daniel H. Olsen (London and New York: Routledge, 2006), 36.
[9] “pilgrimages” in Dictionary of the Christian Church, 1228.
[10] J. G. Davies, Pilgrimage Yesterday and Today: Why? Where? How? (London: SCM, 1988), 7, 9.
[11] Medieval pilgrimage was commonly regarded as a penitential activity which could reach its climax with the remission of an individual’s sins. Davies, 2.
[12] There was a great eagerness to obtain relics which had a commercial potential, and long before,  Augustine had criticised the base commercialisation of many hypocrites selling the relics of martyrs or so-called martyrs, but relics were also thought to embody the personal holy presence of the saint with which they were associated therefore they were believed to be able to effect remarkable cures. Davies, 3, 4. Christian pilgrimage has been associated with purification, penance, worship, and healing, but pilgrims were known to be driven by more secular desires, such as wanderlust, pastime, curiosity, and exploration. Tatjana Schnell & Sarah Pali, “Pilgrimage today: the meaning-making potential of ritual”, Mental Health, Religion & Culture 16.9 (2013), 890.
[13] Bradley, 46.
Posted by jean.heather at 6/27/2017 08:53:00 pm