The mystery of the unnamed travelling companion 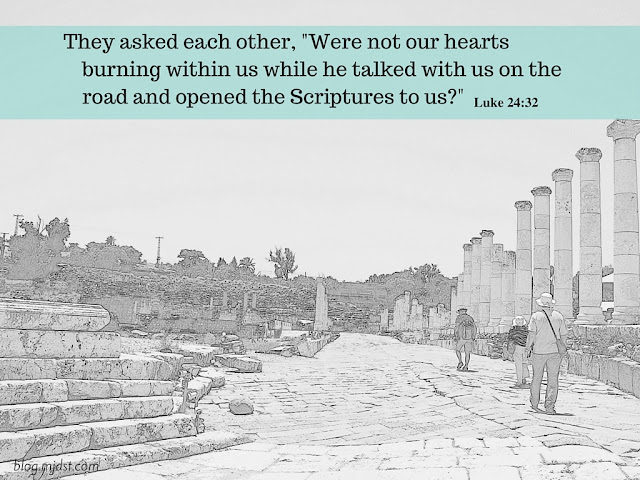 Have you ever tried doing an internet search for images of Jesus and the two (disciples) on the road to Emmaus? If you do, you will probably notice that most of the scenes consist of three men - Jesus, Cleopas, and one other man. For most of my life I pictured things that way too. However, not all of the images picture Jesus with two men. Try it for yourself and see what else you can find...

The well-known post-resurrection appearance recorded in Luke 24:13-35 is one of my favourite stories in Luke's Gospel mainly because of the vivid description of the encounter, the amazing transformation the characters undergo during the course of their journey, not to mention the glorious recognition of the risen Jesus at their destination. The Gospel writer gives us so many details of what happened on "the same day" that Jesus had risen from the dead while "two of them were going to a village" (v. 13), for example...


Then, Luke reveals the name of one of the two disciples. It's Cleopas (v. 18). He's only ever named once for sure in Scripture, in this verse. And he asks Jesus, "Are you the only visitor in Jerusalem who doesn’t know the things that happened there in these days?" (v. 18) He honestly can't believe this stranger has not heard about the crucifixion of Jesus of Nazareth, the one they had hoped was going to redeem Israel (vv. 19-21).

Interestingly, the Gospel writer says "they replied" to Jesus (v. 19). Both of the two disciples participated in answering Jesus. But, somewhat frustratingly, Luke never goes on to tell us the name of Cleopas' travelling companion! He just doesn't say. And as the results of my internet search revealed, most readers tend to simply assume the unnamed disciple is a man. However, Scripture doesn't explicitly say it was a man and there is a small bit of evidence to suggest that it might have been a woman!

Some commentators turn to John 19:25 which reads, "Near the cross of Jesus stood his mother, his mother’s sister, Mary the wife of Clopas, and Mary Magdalene." It is possible that although the name is spelled slightly differently that Clopas could be a variation of the name Cleopas and that perhaps John's Gospel is referring to the same person as Luke 24:18 does. This would mean that the wife of Cleopas was present with the women who stood at a distance (Luke 23:49) when Jesus was crucified outside Jerusalem three days earlier. And it is therefore not unreasonable to assume that Cleopas' wife, Mary, was the unnamed travelling companion returning to Emmaus with her husband on the morning of Jesus' resurrection.

I suppose that in the end, knowing the precise identity of Cleopas' unnamed travelling companion probably doesn't matter all that much one way or the other. It remains a mystery. Nevertheless, given that the very first witnesses to the resurrection were all women, I like to picture two disciples on the road to Emmaus that very same day......

...and of the two burning hearts walking alongside Jesus,

I imagine that one beats with hope and excitement inside the breast of a woman.